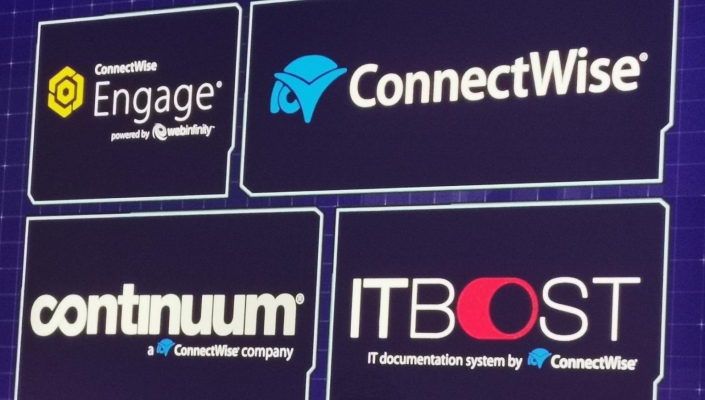 ConnectWise is proceeding with acquisitions that position it as a platform for MSPs, providing a portfolio of solutions that aim to allow it to dominate an MSP’s offering.

By buying Continuum and ITBoost, as well as a strategic partnership with Webinfinity, it is aiming to put a range of problem-solving resources, tools for efficiency, and fuel for growth in the hands of partners. ConnectWise itself becomes a technology and services platform for the technology channel – from vendors to distributors to TSPs and their customers. In addition, the company announced it is launching a security initiative calling for the entire industry to fight back against cyber security threats.

This looks like a subtle change from previously announced plans to focus on security as its main growth area and puts it in a position to scale its strategic offerings and move into a wider channel.

The convergence of ConnectWise’s existing areas (PSA, RMM, CPQ), with the service-enabled RMM, security and NOC/SOC and Help Desk from Continuum, automated IT documentation from ITBoost, and partner relationship management (PRM) from Webinfinity, aims to lift its value to Technology Service Providers (TSPs). TSPs will be connected upstream to suppliers and downstream to its customers, creating a unified business operating environment to accelerate TSPs success, it says.

“Over the last 15 years ConnectWise has become the leading provider of technology solutions and services to MSPs. Now, by executing on these deals, we will be able to expand our scope and capabilities to assist the broader community of TSPs in all facets of their business,” said Jason Magee, CEO, ConnectWise. “This is a revolutionary play, making ConnectWise the epicentre for everything from business management and documentation to service delivery and operations management, while also making it much easier and more efficient for partners to work with the technology suppliers they have in their stacks.”

CEO Jason Magee tells IT Europa this is part of a planned expansion of integrated services. It is also about scale: "We will have close to 2000 people, located in sixteen offices world-wide. It also gives us some 30,000 partners." It positions ConnectWise as a supplier to span from the largest to the smallest customer.

And security is still a key part of the picture, especially as Continuum has spent the last two years building its security presence, and being particularly aware of the issues around the talent shortage. "It means we can give partners guidance on cybersecurity - demystifying it by pulling it onto one platform," he says.

Continuum CEO Michael George says it helps with the vexing issue and challenge of channels having to go to multiple vendors. "It is not just about security. It is a plan to unify all things on an architecture."

It also opens up other possibilities for the future, Jason Magee says, with the financial backer of the merger, Thoma Bravo putting millions of dollars into an AI engine to work on pattern recognition and anticipate threats.

The purchase of ITBoost will help partners with IT documentation, while the addition of a relationship with Webinfinity aims to "streamline vendor interactions".